Funko is bringing some seriously awesome things, with these POP! Animation Attack on Titan figures! If you haven’t seen the anime I would highly recommend it. It’s glorious, and the opening music to the show, especially during the first few episodes really gets your blood pumping! This new Funko Series comes with Eren Jaeger,  Mikasa Ackermann, Eren in Titan form, and a large 6″ Colossal Titan.

Eren looks to be wearing his Survey Corps get up and comes with his 3D maneuver gear, so he can be safely out of reach of those titans. He is also dual wielding his swords!

Erens adoptive sister, Mikasa also comes in her fighting gear, featuring her military outfit with wonderful details. She also comes with her swords, ready to do battle. In the show she’s particularly skilled at fighting.  I think it’s cute the way her hair hangs in her face.

This Eren figure is really neat, if a bit intimidating! It would be cool to collect both Eren versions together. 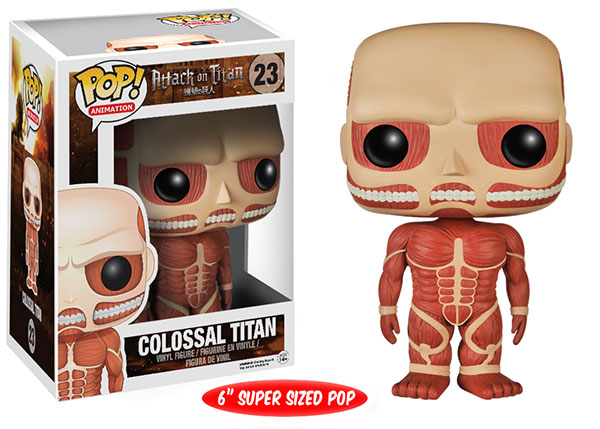 Smarter and bigger than your average titan, these are the ones to watch out for! This figure isn’t quite as scary as they look in the anime, but while still somewhat menacing this is a cuter version.

Available this month! Which figure do you like the most?

View my other videos here